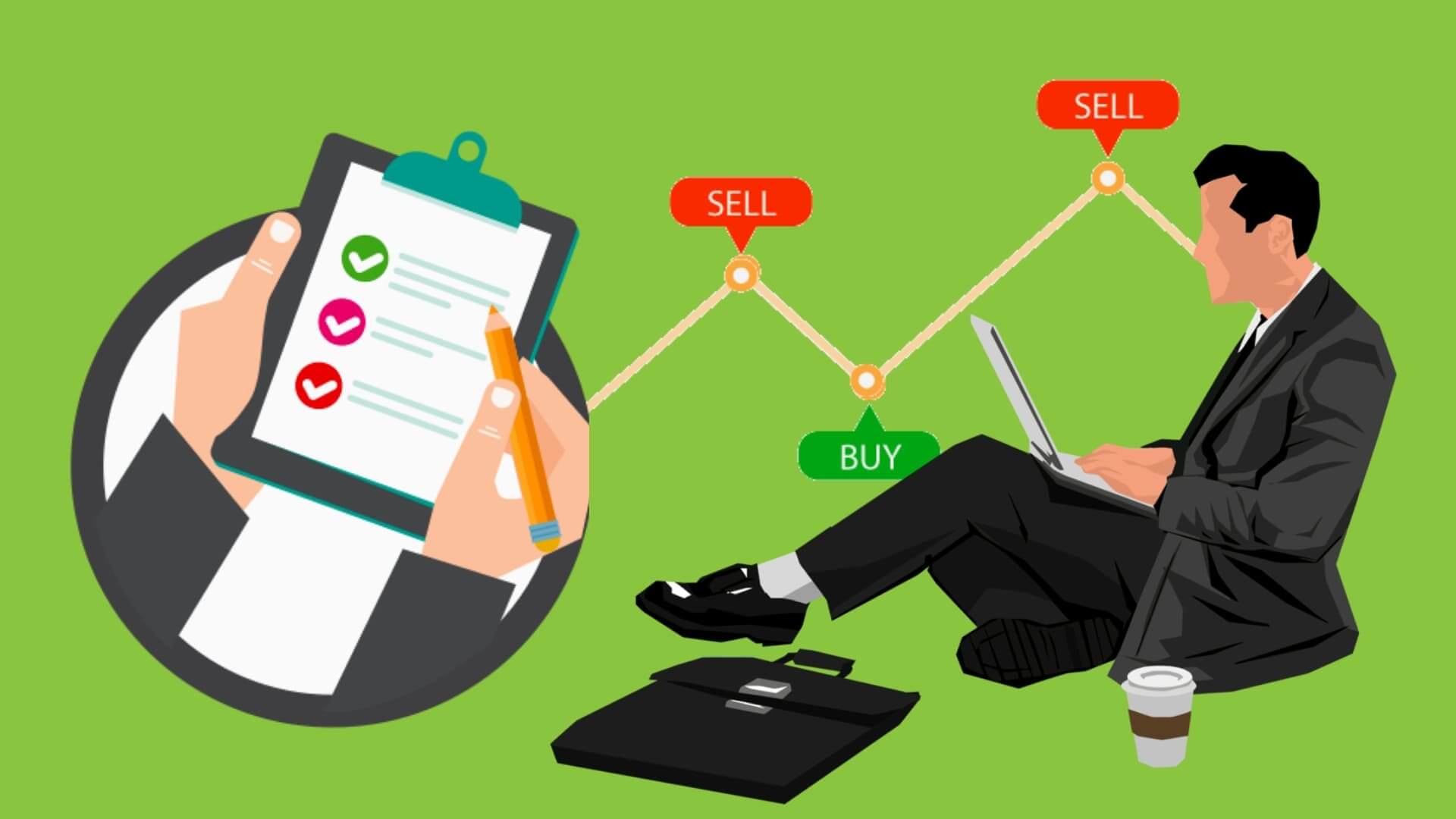 How to Evaluate Your Binary Options Trade: Things To Mind

As a trader, you have to keep certain things in check to ensure profitable trading. One of the most important task of a trade is to evaluate his trading. In this article, we will explain how you can evaluate your binary options trade.

Once your start doing this, you will see the results yourself. Without further ado, let’s start. 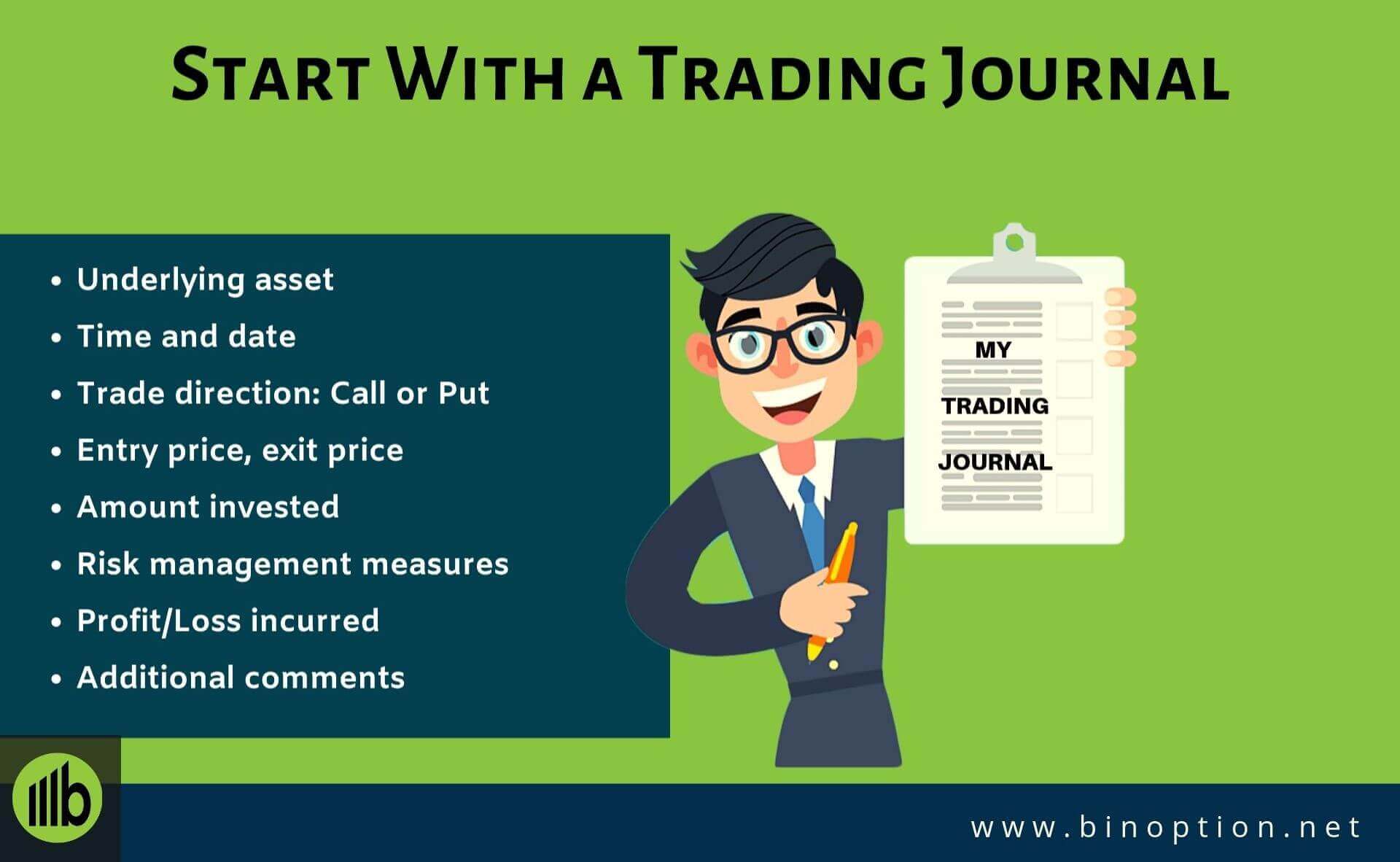 Ask any successful trader how they make money from trading. Granted, you will get multiple answers, but the common one that every trader will tell you is they maintain a personal trading journal.

Here, they record details of every trade they make. Every trade that you make must contain the following information:

In the earlier days, traders used to record these in a notebook. This practice is maintained even now by some old-school traders.

However, with the advent of technology, traders now maintain their journal electronically making use of spreadsheets and screenshots.

In any way, a trading journal is the stepping stone to evaluating your binary options trade.

Make it a routine, either weekly or monthly to assess all your trades. Find out how many mistakes you have made and how you can avoid them in the future. 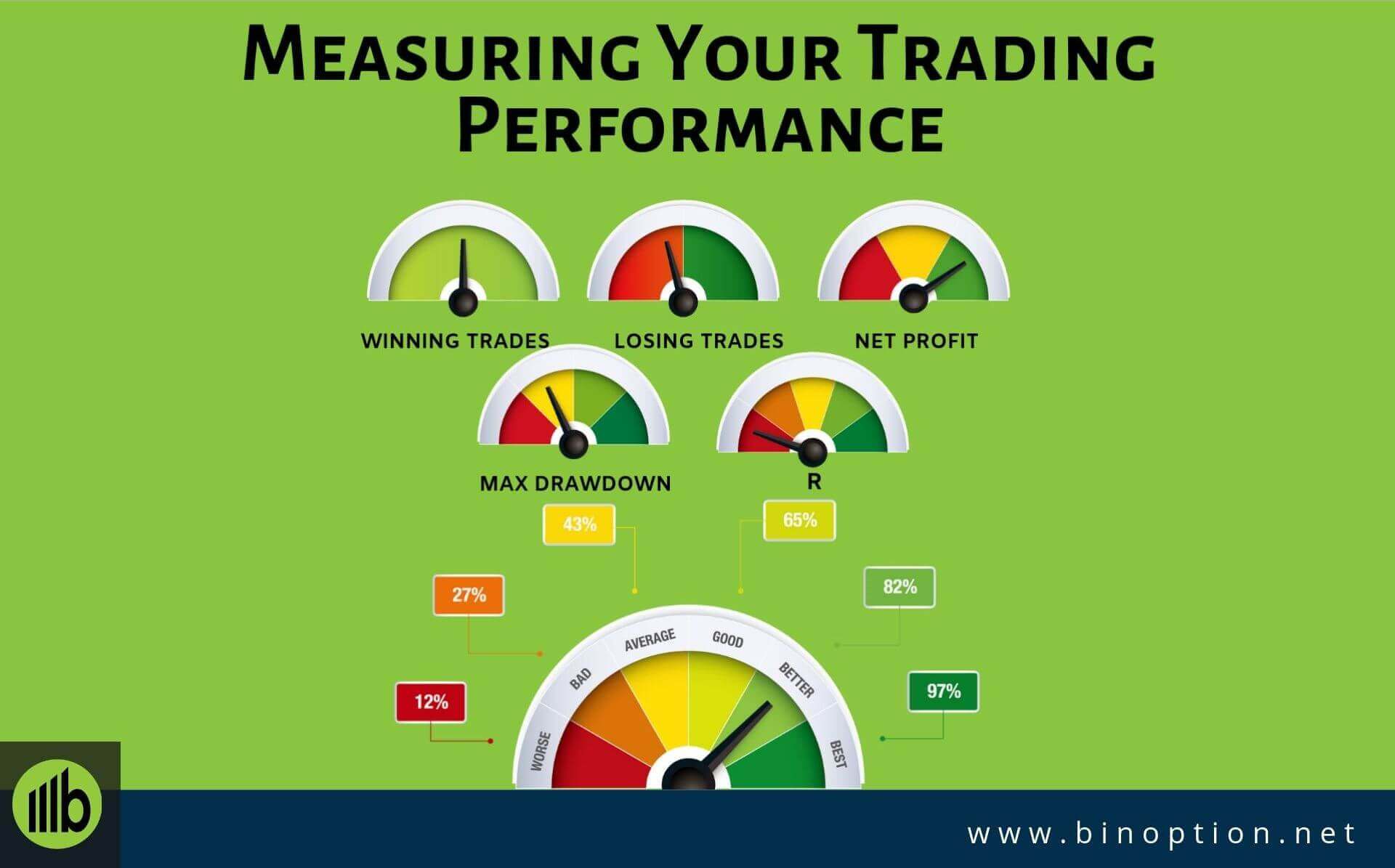 Measuring your trading performance is a part of evaluating your binary options trade. Think of it as your output.

However, your profit and loss isn’t the only thing that matters. There are other key performance indices that you need to keep track of.

Most traders don’t get a complete picture of their trading because all they focus is their profit and loss.

Some brokers provide you a monthly trading performance report where you will get a comprehensive analysis of your trading activities.

Off course, you won’t need all the information that is present there as it may overwhelm you. Some of the metrics of the monthly trading performance that you need to keep an eye out on the following:

This represents the total number of trades you have won over a certain period of time. For simplicity, let’s assume you have performed 100 trades during last month.

You have won 56 of them which means you have a win-rate of 56%. This metric is very important because it ensures the effectiveness of your trading system.

If you are not satisfied with your win rate, you need to evaluate your trading decisions then. Eliminate what’s not working for you and add new measures if you have to.

Just like winning trades, you need to keep an eye out on the losing trades as well. Following the previous example, out of the 100 trades performed, 56 resulted in a profit and the remaining 44 ended up in a loss.

Since Binary Options are a yes/no prediction based trading system, it means the 44 trades you lost were wrong predictions.

As a trader, you need to analyze what went wrong in those trades. This is where your trading journal comes in handy again.

Look at all the details of that trade and make the necessary changes so you won’t repeat your mistakes again.

Take it as a challenge to reduce your loss rate lower every month.

You need to focus on your net profit instead of gross profit. The difference between them is the deductions of all expenses related to the trades you make are taken into account.

Therefore, your net profit amounts to $9050. Net profit is directly correlated to your trading performance. Higher your profits, better your performance.

However, this doesn’t show the complete picture. Compare 2 traders A and B. A is a small time day trader who performs multiple trades per day.

On the other hand, trader B performed 10 trades in the same period of time and won 6 of those trades. He is a big time trader so his positions are usually large in size. He has  a net profit of $4500.

So the question is, since trader B has a higher net profit than trader A, is he the better trader?

No. A has a better win rate than B and in the long run, A will outperform B in terms of profit.

Therefore, evaluating your binary options trade is not just about net profit like we mentioned earlier. 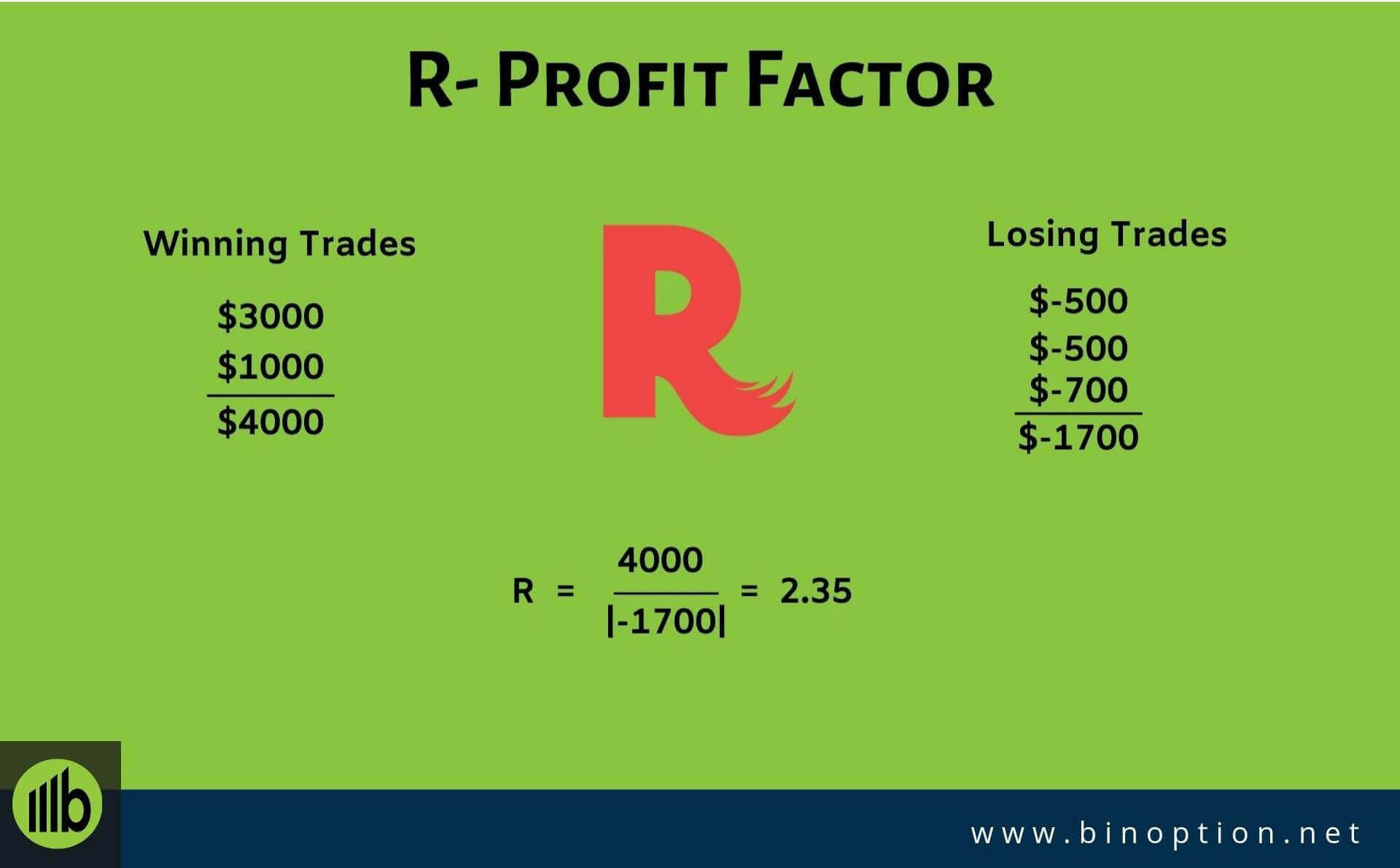 R is a profit factor to measure profitability. Previously, we have seen that win rate is a better performance metric than net profit.

R is an even better measure of performance because it accounts for the absolute value of your trading losses.

Let’s explain with an example. Say you performed 5 trades. 3 of them were a loss and 2 were profitable. That means you had a win rate of only 40%. On paper, it makes you look like a bad trader.

Your net profit stands at $4000 and the net loss stands at $1700. Calculating R, we get 2.35. If the value of R is positive, it means you are on the winning side. Keep in mind that you lost more trades than you won.

Therefore, R gives a clearer picture than both number of winning trades and net profit.

Other than performance metrics, you also need to evaluate other factors related to your binary options trading.

These can include your broker. Is the binary options broker that you are trading with reliable enough? Is their platform responsive and swift to meet your trading demands? Can I withdraw my funds quickly without hassle?

These are the questions you need to ask regarding your broker. Here, at Binoption, you will get the best binary options brokers. With brokers like Binary.com, IQ Option, BinaryCent, and Olymp Trade, you can trade confidently, and with peace of mind.

The main aim of trading is to make money. But at the time, you also need to set yourself targets to improve. And evaluating your performance is the best way to find out if you have improved or not.

"Even worthwhile endeavors need evaluation in order to determine if they have become distractions from the best goals." 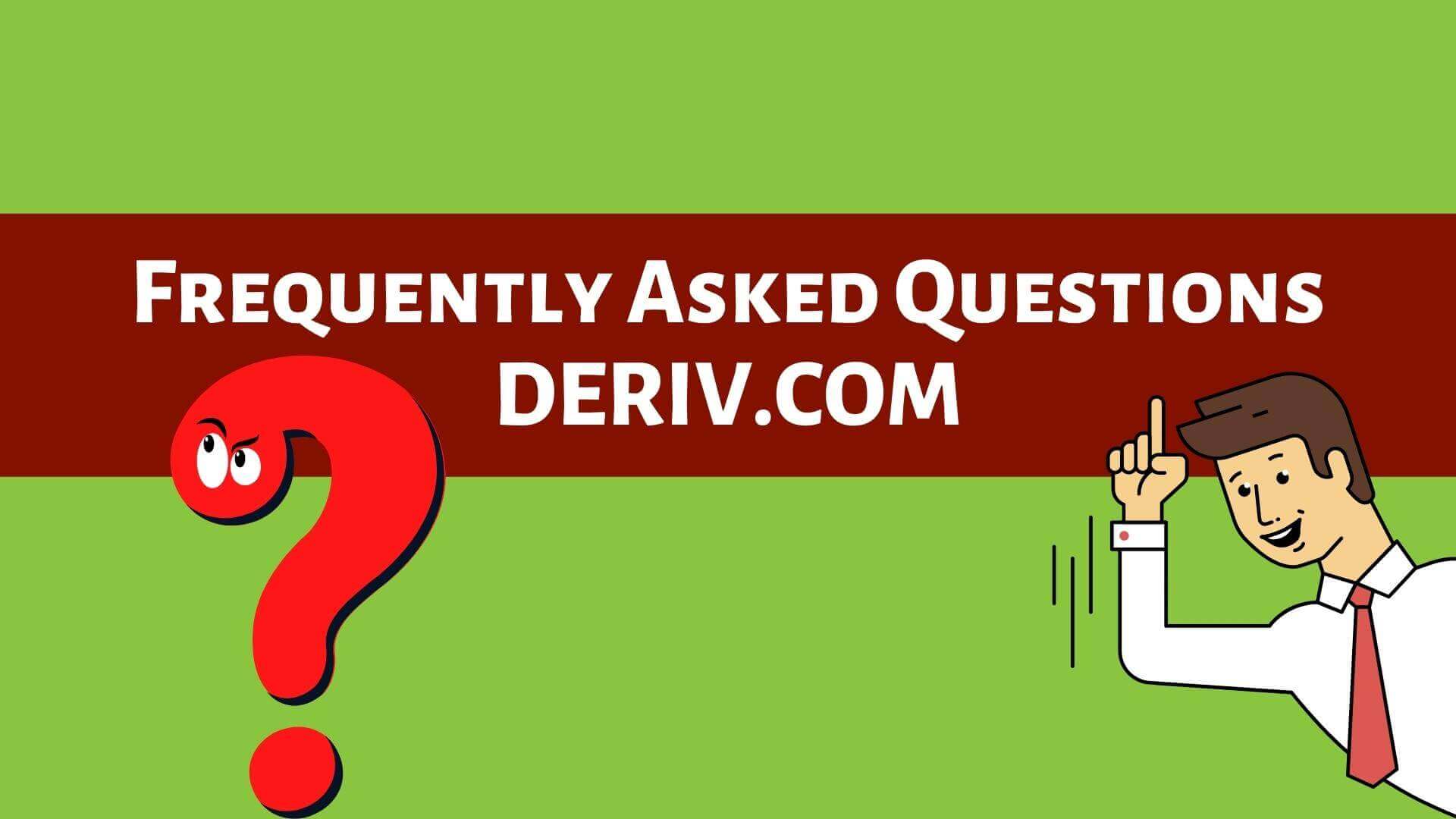