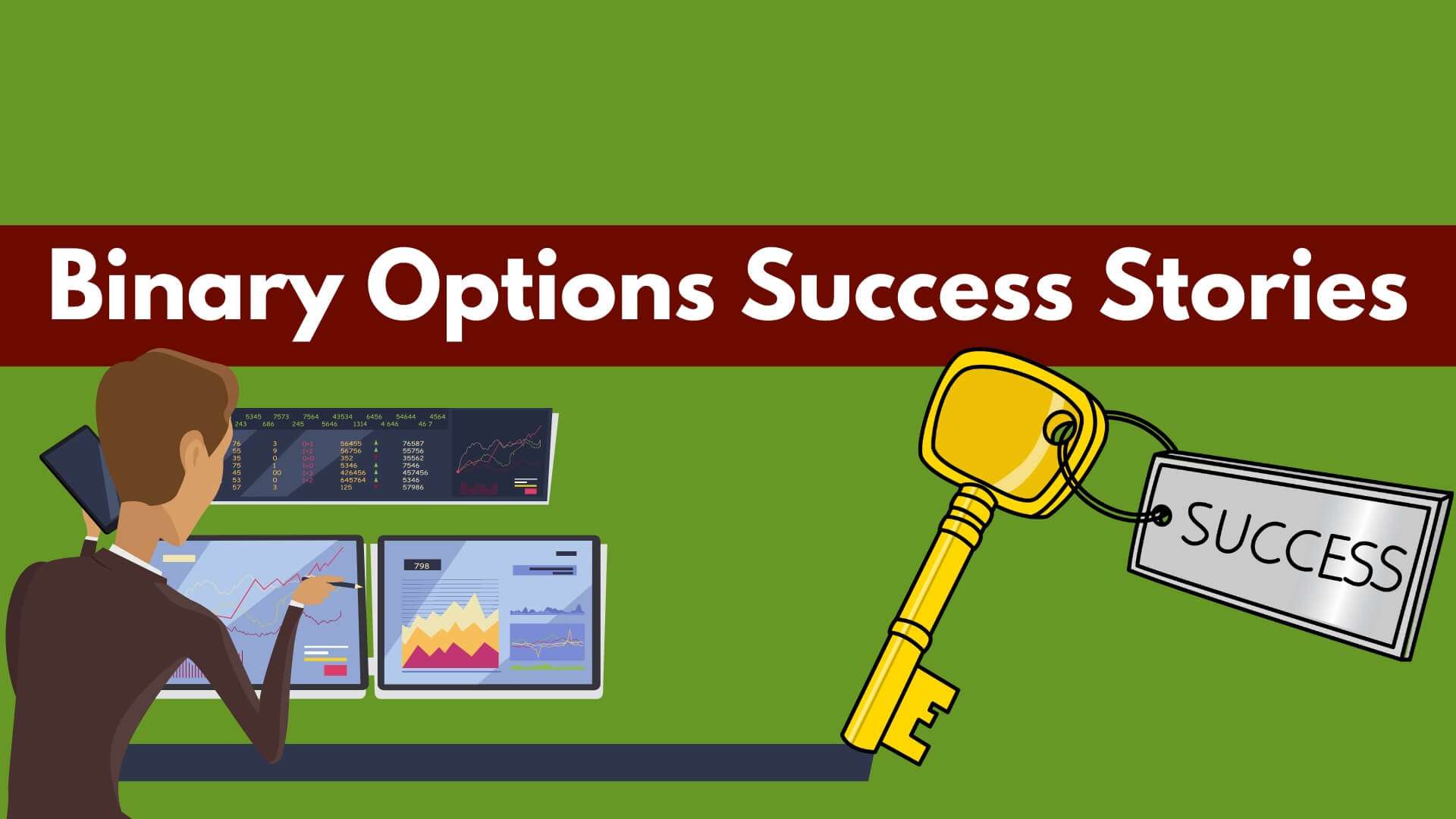 It is thrilling to read binary options success stories in which traders move bars with magic wands and fill boxes with cash. Trading is not a tale. One could only comprehend the crazy information if he knew the overall game of the market.

And about successful stories, you may have something to ask; has anyone ever traded binary options and become successful at it?

Absolutely, but it isn’t easy to show a list.

After hearing hundreds of scam stories, it isn’t effortless to make up one’s mind. And this article will show you how to trade binary options successfully, the myth, and our top brokers who clean up the muddy path.

What Is Binary Options?

Binary options is not a form of gambling. What could it be if it is not a casino game? Binary or options trading is a form of investment or contract without owning assets. Traders make a prediction and get rewarded based on their predictions.

If your prediction comes true, you will win the trade. However, you will lose the entire investment amount if it goes wrong. That’s how options trading works.

Need an example? Visit what is binary options trading to know the framework more clearly with examples.

Is It Worth Trading Binary Options?

You need to make it worthwhile. Binary options is one of the simplest trading forms without any complex instructions and strategies. However, to demonstrate your victory, you must predict the right movement of an asset price. And it is the formation of options trading.

On the other hand, to build a strong portfolio, it is a must to fulfill a few requirements as a trader. Touch wood, the following requirements will help you make each trade successful.

But do you know why binary options trading is gaining popularity these days?

The fundamental reason is its simplicity. Aside from this, there are other factors that make this form of trading extremely appealing. We are listing them down one by one –

If you want to be sure about the risk factors, sorry to disappoint you; not a single trading type is fully secure and risk-free. But, when it comes to scam history, binary options win.

However, time and trading patterns have changed a lot. People are more interested in options trading and digital options than regular options.

Later, we will discuss binary options success stories and how this form reverts from catastrophe.

Yes, these days, binary trading has changed with countless benefits. The market is still covered with a layer of scam brokers, but trading in this form is much more secure than before. Regulation is regarded as a symbol of the safety of trading.

So, it would help if you found a regulated broker to enjoy peace of mind in binary options trading. Additionally, licensed brokers will help you protect your account from fraudulent activity.

The history of binary options has not been a buttery one. It has uneven success stories. However, it has survived on the market and is slowly gaining popularity. History indicates that this trading class was uncovered in the year 2008. From that year, it was publicly available for traders with limitations.

After a while, multiple trading brokers appeared with features. Binary options trading was pretty easy, but scams were the biggest fear. And here comes the dark period for the binary options industry. However, the industry has already surpassed that phrase.

The Times of Israel reported and exposed the fraudulent activities of binary options in 2017. According to that report,

“At its height, binary options were estimated to bring in $5 billion-$10 billion a year. Hundreds of firms have operated from Israel, employing thousands of Israelis and defrauding customers worldwide.”

Additionally, the country banned the practice and extended the deadline until 2017. All of this happened only as a result of strong laws and regulations.

The same happened with other countries like the United States, South Africa, Brazil, Australia, etc. After a strong lawsuit, most countries reduced restrictions or banned offshore brokers.

On the other hand, instead of believing in luck, they focus more on learning innovative strategies and skills. Similarly, they do not have unrealistic expectations of the trading market.

We have found many successful binary traders while exploring the industry, but 90% of them are not willing to share their experience with the industry. However, we have managed to get a few experienced names and the finest South African traders.

Note that they are not dedicated to trading the binary market. Besides, these traders are the kings in name and fame for the overall SA trading industry.

In contrast, many people have already lost money because of greed. With no previous financial knowledge, they try to get the highest return without solid strategies. Pile up your trading plans, keep a cool head, analyze the market, and then hit the green or red button.

Binary trading in South Africa has not been trending for a year. It is the most hyped and valuable market for traders. Moreover, through this article, you will know the names of young millionaires who have been ruling the market for a long time.

It’s time to get started.

A self-made millionaire, he’s one of South Africa’s biggest traders. In the beginning, he was a trader and later established his own training institution for traders. Moreover, his expertise pulled him up because he came from a financial background.

According to the information, George Van Der Riet’s net worth is approximately $20 million.

A Cape Town native became the richest man in South Africa with a passion for ruling the financial market.

At the age of 23, Sandile Shezi tastes the caramel of becoming a millionaire. He is another richest South African trader who owns a mansion on an exclusive private estate.

He was a humble dreamer who loved to play with charts. Slowly he made himself a guru who built a booming business empire.

Sandile comes from a non-financial background and has been recognized as one of the top young businesspeople in South Africa for the last five years.

He is also a successful trader who became a millionaire at 21. He got his bachelor’s degree in technology and became a master trader. In one of his interviews, he positioned himself as a technical trader.

Moreover, we failed to get information regarding his net worth. However, he has a Forex academy to teach new traders how to trade well in the volatile market.

Kgoposto Mmutlana, a millionaire trader who came from an interesting sector. By profession, he is a singer along with a full-time Forex trader.

His LinkedIn profile shows people know him as DJ Coach Tsekeleke on social media platforms. Unfortunately, we also failed to list his net worth.

Is There Any Supervillain In Binary Trading Era?

After hearing the word “supervillain,” one name popped into my mind: Yossi Herzog. He is one of the biggest wolves in this industry who pulled hundreds of millions from the market by defrauding thousands of traders.

Team Herzog operated multiple trading groups in Australia. Everyone in the group scammed traders with lucrative schemes and made expert traders lose money.

The Age and Herald revealed that, during Herzog’s nearly 10-year stint doing business in Australia, ASIC twice investigated his schemes but failed to close them down.

Unfortunately, we are not clear about his presence anymore. According to the report, people found his footsteps in last June 2020 in Israel.

Is Success In Binary Trading Possible?

Every trader wonders how to become a millionaire without experiencing any negative consequences. But the real world will show you a mirror where you will find yourself as a completely different person.

A person with hundreds of heartfelt quotes. Yes, trading emotion is the biggest enemy of a trader. You can lose countless money if you do not learn how to control your emotions.

Besides emotions, other factors can also affect a trader’s journey.

Trading success with binary options is possible. Moreover, traders can earn over 90% if they follow these three steps:

However, you should also avoid a few things that we will learn in the next phase.

How To Become A Successful Binary Options Trader

The word “success” in trading completely depends on you. Traders typically believe that successful traders follow the quick-rich scheme. Unfortunately, nothing can make you rich if you don’t know how to read the market.

Expectations are good, but unrealistic expectations can lead to poverty.

Binary options trading is a popular trading method with the highest payout ratio. However, popularity doesn’t mitigate the risk of trading.

To become a successful options trader, you must follow a few tricks. Just to let you know, this is not financial advice. After researching the industry for years, we just compiled these basic tips. Moreover, you can also read an article where we outline the secret recipe for becoming an expert trader.

On the other hand, if you want to know how to win every trade, read this.

So, for now, let’s take a look at these tips to see how pro traders do it.

There are some common mistakes that you make unconsciously. Traders of any age or experience group have made mistakes in their lives.

By avoiding the mistakes listed below, you can bring success to your trading life:

Over-trading is a serious issue if you fail to control it. As a day trader, you can trade multiple times before the market closes. But that does not mean you have to make excessive trades to make up for your loss.

Set a risk-reward ratio with a solid plan and trade according to it.

Many of us who encourage people to trade with words make outrageous promises. On the other hand, it is the easiest form of trading, but that doesn’t mean you can trade without any trading knowledge. You must know how the market works and the most appropriate time to enter the market.

Otherwise, you will end up with zero.

Risk management is crucial to success. You should know how to manage risk without losing money. Remember, demo accounts can help you sharpen your skills. Open one and make your first trade without risking money.

What Is The Easiest Way To Become A Millionaire?

There is no easy way to become a millionaire. You should have a basic understanding of the market to start quickly. But slowly, to become a master, you need to know all the specific details about trading.

Can I Learn Binary Options Without Risking Funds?

Yes, definitely. You can learn binary options trading or options trading on a demo account without risking your funds. A demo trading account will give you an environment where you will find everything related to trading. The amount will be virtual, though.

Hope this article will help you to understand the actual success stories of both binary options trading and traders. Since this is collective information, it can vary from trader to trader. Make sure you don’t take any tips as financial advice.

To become a millionaire like our mentioned traders, you need to grasp basic trading knowledge. Let’s try to become a master in it. Also, check our guide section to know more about binary options.